from 1526 reviews
Can't wait for the full summer sun! Silvermine was created by J.A. Beagley of Sibly, ILL in 1890.

Does well on poor soils.

I have noticed a sweet flavor chewing on this corn in its dry stage. Leads me to believe it would be a fine roaster.

Ernest W. Young of Lawrence, Kansas was a well known breeder of Silvermine around 1900. His 1904 test produced 38-68 bushels an acre. He improved this in 1905 with 42-73 bushels an acre. Even in 1906 when Kansas experienced a severe drought and many other corns failed, Silvermine corn still produced 50 bushels per acre.

I bought this for my corn crop this year with lacking the knowledge that I could not plant two different kinds of corn together in my garden. After I learned of my mistake I moved 5 of the silver mining stocks after they sprouted to out front of my house. It was a little experiment to see how the silvermine would grow because I have never planted it before. Every seed out of 30 seeds germinated when planting. Will buy again. 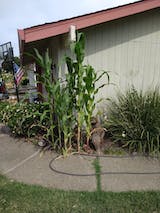 Zea mays var rugosa (hybrid) Peaches & Cream Hybrid Sweet Corn (82 days Sugary Enhancer Hybrid (SE). That means this varietiy will stay sweet and tender for 9-14 days after reaching maturity. A popular favorite Peaches and Cream is succulent, sweet and everything you would expect in a summer sweet corn. Never buy sweet corn in the grocery when its so easy to grow and tastes so much better out of your own backyard. Think summer bbq and sweet corn dripping with butter! Peaches & Cream a... Golden Bantam Learn how to grow the absolute best corn! 1906 Keith & Co. Seed catalogs says about Golden Bantam Corn Seed... "A sterling novelty of extreme hardiness. Can be planted earlier than any other true sweet form; is then the first corn to produce cobs for the table. Is superior to all other corn in rich, sweet flavor, and is the best corn to grow for home use." 1932 Burpee's Seed Company catalog says about Golden Bantam Corn Seed... "America's favorite sweet corn! The name al... Zea mays Stowell's Evergreen Sweet Corn (95 days)   Stowell's Evergreen Sweet Corn was originally developed by Nathaniel Newman Stowell of Burlington, New Jersey in 1848. Stowell was a farmer and spent some years refining this variety, which he developed by crossing Menomony Soft Corn and Northern Sugar Corn. In the fall of 1855, he sold just two ears of seed corn to a close friend for four dollars, on the agreement that the seed was for personal use only. Stowell's "friend" then re-sold th... (85-89 days)  Sugary Enhancer Hybrid (SE). That means this variety will stay sweet and tender for...

(85-89 days)  Sugary Enhancer Hybrid (SE). That means this variety will stay sweet and tender for 9-14 days after reaching maturity.  Kandy Korn is a bit of legend for its outstanding flavor and high sugar content.  Sweet delectable golden kernels are born on 8" ears with 16-20 rows and held high on 8 foot burgundy colored stalks. Kandy Korn has a long late harvest perfect for fresh eating or freezing. If you really wanted corn all summer you should plant Xtra Early Sweet and Kandy Korn. No...