from 1580 reviews
Can't wait for the full summer sun! Cereal rye grows best on well-drained loamy soils but is tolerant of both heavy clays and droughty, sandy soils. It often grows in infertile soils where other cereal grains fail. Optimum soil pH is 5.0­7.0, but pH in the range of 4.5­8.0 is tolerated.

Cereal rye tolerates drought better than other cereal grains, in part because of its extensive root system. It grows best with ample moisture, but excessive moisture during the fall and winter suppresses vegetative growth. Cereal rye does not tolerate flooding. Snow is readily trapped by the cereal rye plant, providing insulation from cold weather and increasing water availability in dry climates.

Cereal rye may be used as a cover crop, grain, hay, or pasture. It is one of the best cover crops where soil fertility is low and/or winter temperatures are extreme. Cereal rye is an excellent choice as a late-sown cover crop. In western Oregon it may be planted any time of the year.

Because it establishes rapidly in cool weather and grows throughout the winter, cereal rye is excellent for protecting the soil from wind and water erosion, scavenging soil-N before it is leached below the root zone, and suppressing weeds.

Cereal rye has been used successfully in Oregon as a relay-interplanted cover crop in short-statured crops such as broccoli and cauliflower.

I bought these seeds to sprout for my hens. I mixed four types of grain together and sprout 2 Tbsp. of them in quart jars. After eight days they have grown nicely and provide fresh greens for my girls. They love them. 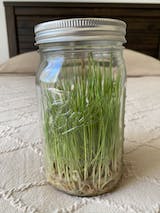 I planted my rye on 11/22 and it is 2" tall already. Looking forward to harvesting late spring / early summer. Gossypium hirsutum Erlene's Green Foliated, White Cotton (130-150 days) 1 gram packet ~10 seeds Due to state regulations, we cannot ship to California, Georgia and South Carolina There are a limited amount of packets, so get them while you can! A Texas Heirloom, Erlene's Green Cotton has light olive green fibers. Erlene Melancon lives in East Texas, where she has been spinning this green cotton, that was also favored by her grandmother. Cotton's of several colors, like green, blue, yellow, an... (20-45 days)  One gram will sow 45 feet at (thinned) spacing of 12-18” on 24” rows. Beautiful tri-color annual vigorous variety.  Tender greens that will please the eyes as well as the palette.  Great as a colorful addition to salads, or cooked.  Add sunflowers and make a stunning flower arrangement! Amaranthus caudatus Red Garnet Amaranth 7 grams - approximately 7000 seeds per seed pkg One gram will sow 45 feet at (thinned) spacing of 12-18” on 24” rows. Intensely bright fuchsia-red plants are just much brighter than most Amaranths we think. Red Garnet can be used as a cooked green, allowed to flower for a dramatic display in the garden or grow it for grain! Some folks share the grain with the birds attracting beautiful buntings, goldfinches and other flying jewels. Red Garnet Ama... Hordeum vulgare subsp. vulgare Improved Burbank Hulless Barley (90 days) 50 seeds ~2 grams Luther Burbank died April 11, 1926. 1927 the last Burbank Seed Catalog States..."Final offering of Burbank Barley. One of Mr. Burbank's Greatest grain creations. In the store-house where Burbank kept precious seeds for his own use, we found a treasure that will delight farmer and growers of fine grains...a few sacks of his hulless barley." This was the last time this barley was offered to the public un...