from 1659 reviews
Can't wait for the full summer sun! Produces earlier than many okra varieties and can have some real heavy yields.

Pods are tastiest around 3".

Pick your okra daily. Never let the pods grow out past 3" or they will become tough. Even worse the plant will quit producing more yummy okra! Then whatcha going to do when it is time for gumbo!

Cream-colored flowers are also edible and may be stuffed or used as a garnish.

For those of you in the South where I come from you will have no problem growing okra, but if like me you now find yourself in an area with cool summers like the Pacific Northwest growing okra can be a tricky business. Try starting it in a greenhouse and transplanting into the garden about May. At best you'll get a taste of okra for a few weeks on stunted 2' plants depending on your micro climate. To improve your okra plants you need to improve the heat units. To do that try planting next to heat sinks like houses, brick/rock walls or anything that will absorb and radiate heat. Good luck and send me your success stories!

Second time I grow these, grow very producer. One thing, I have to pick daily cause they grow very fast.

My seeds are germinating well, packaging is resealable which is a huge bonus!

Clusters of five and six okra pods burst out of this plant at nearly every leaf juncture. I've never seen a plant produce so much okra. I have basically one surviving plant and it's nearly four feet tall. The others were nibbled by an invasive bunny. Another okra plant will make it, but is only about two feet tall which makes me think that the bunny doesn't exist anymore. Had eight okra plants thrived I don't know what I'd do with all the produce. It's exceptional in terms of growth and multitude of okra clusters. 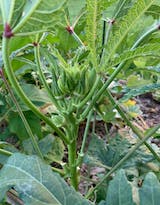 The okra seed has done well so far. We are not yet receiving bounty from the plants, but they are doing well. Spinacia oleracea Giant Nobel Spinach (48 days) Seed Package Contains 4 grams or approx. 350 seeds Introduced in the 1920s this has remained a popular spinach for some time now. Which is saying something. Giant Nobel spinach is extremely large and has a spreading in habit. Mmmm could that be where it's name came from??? OK, for a spinach it is big! That means easy picking and cleaning. You know, getting that pesky sand off those leaves? It is a breeze with such big leaves. Giant Nobel... Pisum sativum Sugar Ann Snap Pea (54 days) Sugar Ann is considered one of the best early snap peas around. Dwarf vines only reach 2' long (not a bush), but are loaded with sweet, crisp, 2 1/2" peas. Perfect for those with limited planting space. We simply cannot get enough of these for stir fries. They are so crisp and sweet we eat them raw in salads as well. Plant early and harvest early. Sugar Ann Snap Pea is best picked small (but filled out) when it is crisp, juicy and sweet. Doesn't tol...