I purchased the Fall Seed Collection for some container gardening this autumn and have been very pleased with the results. Germination rate was fantastic and I had to do much more thinning than I usually do from store-bought seeds. The little growing guide helped with varieties I haven't grown before (hello, kohlrabi). All of my plants are hardy and healthy and I'm already enjoying the early harvests. Looking forward to maturity on the longer growers. Will be buying the Granny's kitchen garden pack for spring. Thanks so much!

These had lovely dark centers and bold flavor. A very pretty tomato. Will replant again next year.

I planted several varieties over the past couple years. These have been the most reliable producers so far. Averaged 10-15 lbs. one larger one about 20. Nothing remotely close to 40 lbs. that’s ok. Huge ones are a pain to break down.

I sowed the seeds for my fall planting of purple sprouting broccoli a little over a week ago. Got over 90% germination. I'm really looking forward to the harvest. I LOVE broccoli!

This chard is very much like spinach. I think every seed germinated, so I've been thinning as we're eating. It's very tender and is not getting out of control - no huge leaves. I will grow this again.

We started these indoors in January. We transplanted them twice and finally out to our raised bed (full coastal sun). The plant is massive and the tomatoes are TASTY! The best little tomatoes we have ever had. We will likely plant them in a separate bed next year since they grow to such a large size and can crowd out other plants.

Planted seedlings in small containers and gave them away as gifts or sold them at my local boutiques.
Big hit.
Easy to grow. Have a photo to send.

I am extremely pleased with my order. The price, the packaging, and the seeds themself, were all perfect. I would definitely recommend this product and this company. Thank you! Ridiculous.It only cost 40 cents to mail a 25 seed package. It looks like these people are making shipping a profit center, therefore I don't them and wouldn't buy their products. I planted the winter rye in my small garden "patch" (20x20) to enrich and loosen the soil. I planted a bit late (November), but it came up well and is slowly growing. (Zone 7 - TN)
I had hoped to buy cereal rye that I got from you few years back, and it worked sooo well to loosen the soil. But didn't find it in your online store this year.
Thank you for making these products available! Thank you for sending the seeds but it looks like I am having the same problem as the seeds I had sent from Nicaragua. From what I have learnt all mailed items go through a very strong X-ray which kills the seeds. I recently traveled to cuba and ‘smuggled’ seeds out of the country. I was told by very reliable sources that the xrays used at airports is much weaker than mail X-ray machines. And after only four days my Cuban seeds began to grow. Again I thank you for sending your seeds and at least we now know seeds cannot be mailed internationally. Happy new year, Wal Baranow. I love this squash! It is so easy to work with, and it makes simply delicious pumpkin pies. I use a bit less sugar in my pies because these Sweeter than traditional pumpkin. Planted in late November in NC. Germinated and grew perfectly though the winter! I absolutely love the Scarlett Runner Beans!! I couldn't stop eating these, and my plants couldn't keep up with me eating them. The beans are great eating raw while tending the garden. I never had the chance to ever cook them. And the Hummingbird's LOVE them!! We had Hummingbird's fighting and tackling each other to get to the flowers. The flowers also brought a few Hummingbird Hawk-Moths to the garden, which was a site to see. I highly recommend these for both eating and to enjoy watching the Hummingbird's!! 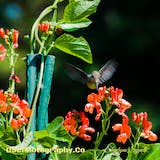 I have to change my rating from 4 stars to 5 stars! Southern Exposures greens have turned out to be larger and more resistant to disease than the other variety of Lutz that I got from a southern seed company. Congratulations on a great plant.The beets are so much easier to grow than chard or spinach and much, much easier to harvest! Mild like spinach! I have not planted any f this yet. l Looking forward to it. Was hoping for a larger seed packet though. Looking forward to planting this. Somehow was hoping for a larger seed packet though. I haven't planted any of these yet. Everything looks good so far. Germinated as expected and arrived quickly

I planted 10 square feet of hard red winter wheat on October 19, 2019. The attached picture was taken on December 14, 2019. (I live in Texas.) As far as I can tell it is doing great! It sprouted within about 4 days. I can't wait to see it when it turns golden.

We planted these seeds and most if not all of them have sprouted! They are now about 3-4 inches high after only a few weeks. It is the best firm, sweetest, juiciest melon I have ever tasted. Holds up to the heat of the day and the cool of the evening in the Oroville Foothills in California 1500+ elevation. A Great Melon. I planted these indoors in Jiffy seed-starters about 2 months ago, and I think every seed germinated. I can't vouch for the final plant until spring. i had above 90 percent of seeds leave the husk (almost 100%), and more than 90 percent took root. i anticipated far higher losses, and ended up with far more than i needed. they seem to be ok with replanting at an early stage, some were transplanted into their own containers before the second set of leaves, some were moved after with only minor losses. far hardier than little yellow or connecticut broadleaf from another company. as i'm growing indoors in the winter with no special lighting, they are growing far slower than i anticipated, but appear healthy and do prefer drawing their own water from the bottom of the pot, they also grew significantly faster when i neglect to water them. they seem to prefer a slightly dryer soil. i can't speak to flavor or potency yet, but i'm sure they'll be fine. they did droop when exposed to the cold when i tried to get them out of the containers to put in gallon pots, but they came right back. i imagine once established they might weather a little cold, but i don't think they'd like it at early stages. its fun that they are from Iceland, it's nice to have a story for your crop like the hopi seeds that were out of stock. i hope you guys keep the descriptions lengthy and interesting since it's really the only place to find any info about these unique seeds. will buy more after examining the yield of this batch. Very poor germination on Burbank Hulless barley. This is a report rather than a complaint; investigator incompetence could be involved here, though it should be noted that germination of the Gujar Khan and three varieties obtained elsewhere was fine. I harvest for the second time